Wedding photographers find their inspiration from many sources, often from associated branches of the profession, whether it be documentary, fashion or portraiture.

The photographer who I believe most influenced my approach, has his roots more firmly based in street photography. Elliott Erwitt has been capturing unique moments across the globe, from city boulevards, to museums and beaches, photographing the theatre of human life in all its idiosyncrasy, with a singular sense of charm and wit.

I discovered his work properly with the publication of his “Personal Exposures” book, the first of a series of collections of pictures that has made Erwitt a modern-day cult photographic figure.

Below are a couple of “wedding shots” included in this book that demonstrate Erwitt’s unique observational skills and his trademark ability to bring a smile to one’s face, whatever the situation.

However, it was an altogether different type of photograph that had a more lasting and direct influence on me.

The book’s cover image featured the scene of a couple caught embracing in the mirror of a car, by the edge of the sea, in the dying light of the day.

This quintessentially romantic photograph, with an almost cinematic quality, really caught my imagination. There was a magical soft atmosphere, revealed by the combination of shapes and textures, and above all I was impressed and intrigued as to how a photographer had managed to seize such a seemingly intimate moment without being seen.

Indeed, even if this is a staged picture, which I have learned it probably was, the image still projects a feeling of immediacy and authenticity.

The force of the picture meant it got lodged in the cells of my photographic memory bank for several years and provided the inspiration for a wedding picture nearly two decades later! 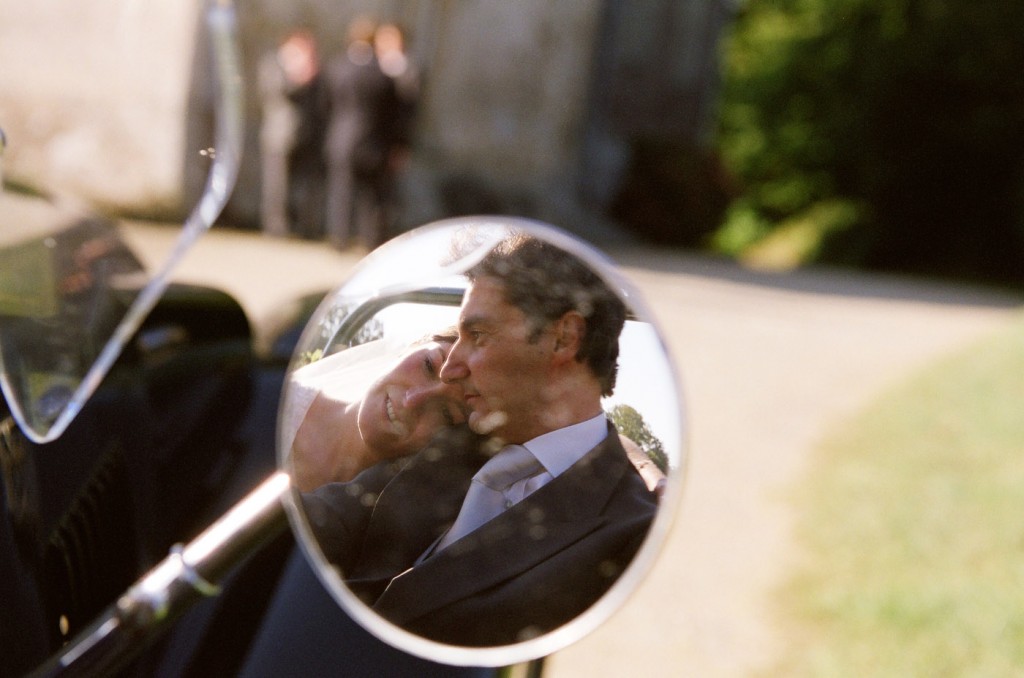 As soon as I saw the vintage car and circular-shaped wing- mirror I thought back to Erwitt’s image.  I seized my opportunity to frame the newly weds sharing a quiet moment of closeness and intimacy on their arrival at the reception venue, before getting caught up in the festive atmosphere of the wedding cocktail with their guests.

Unlike Erwitt, I opted for colour (I was shooting in film at the time), as it just seemed more appropriate in capturing the quality of light and romantic ambiance of this particular moment.

I have attempted to use variations of this idea on several occasions since, but for some reason, this first image remains the most natural and expressive  “re-interpretation” of Erwitt’s classic 1955 California Kiss.

A French version of this article has been published on the Groupedesdix wedding blog.

Article about me as an expert wedding photographer based in France